Dossier: 19982
Type:Heraldic dossiers
Language of the text: English
Please note this is an automatic translation done by a program, if you buy a heraldic document the text will be written by a native language heraldist
Nobility: Nobili
Nobles in:Italia (Regno di Napoli)
The country or region of the dossier mainly refers to the places where the family was ascribed to the nobility and may be different from those of residence

No doubt the family came here from Spain with the prince King Alfonso of Aragon, who, drawing from him the first Spanish nobility, led Simonetto of the ancient and clear nobility of the city of Valencia from the Kingdom of Valenza seco. very young, extremely handsome, and brave Knight; from finding nothing less than this very ancient family in our Kingdom since the year 1086, in which Roberto lived so great, and pious Lord, that he donated the Church of San to the glorious San Benedetto, and to the Monastery of Monte Casino Giovanni in Ponto, with all its reasons, and appurtenances; were some of opinion, that from this Kingdom the B. passed in Spain, and then with the King Alfonso first they returned; but let it be as you wish; returning to Simonetto, jamb of our living B. today, he was of such great value, and knowingly gifted, who ... 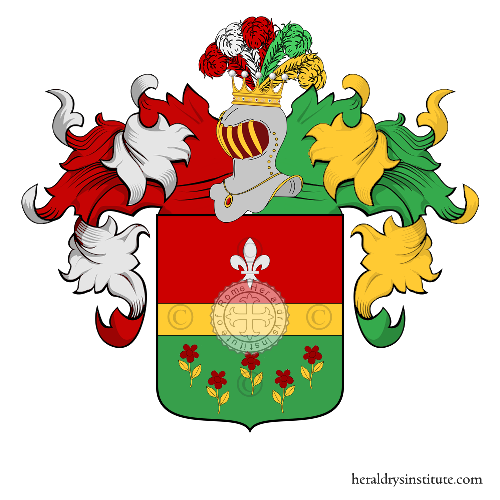 1. Coat of arms of family: Belprato