Language of the text: English
Nobility: Knights - Lords
Nobles in:England
The country or region of the dossier mainly refers to the places where the family was ascribed to the nobility and may be different from those of residence

The surname 'Carlton' is of English origin. It is derived from the habitation name from any of the various places so called, from the Old Norman word 'Karl', meaning 'common man', 'peasant', and the Old English word 'tun', meaning 'enclosure', 'settlement'. The place names commencing with 'C-', rather than 'Ch-', are in areas of Scandinavian settlement, mostly in Northern England. Public and Civil registry archive's confirm that the surname 'Carlton' and or it's variant's, date as far back as the thirteenth century were a 'John de Carleton', from the county of Lincolnshire, England, is recorded on the Hundred Rolls in twelve hundred and seventy-three. Historical archive's have been unable to definitely determine the exact period of settlement in North America but It is believed that the forefather's of this surname were part of the exodus of migrants that followed the Treaty of Peace signed in Paris in 1763, when great ... 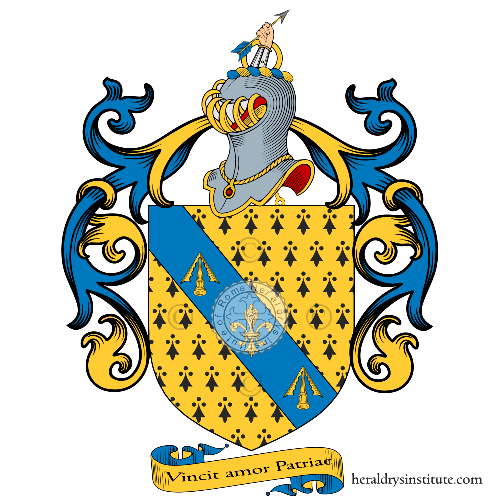 1. Coat of arms of family: Carlton

Erminoise on a bend azure, a fleur-de-lis between two pheons or. Mantling azure and or. Crest-On a wreath of colours issuing out of an annulet or, a dexter hand embowed , the hand grasping an arrow in bend sinister, both proper. Motto-"Vincit amor Patriae."

Blazon of family Carlton from England. Sources: "Irish Names and Surnames by Rev.Patrick Woulfe"; "Emigrants from England to the American Colonies 1773-1776 by Peter Wilson Coldham"; "Burke's American Families the genological publishing company"; "A Dictionary of Surnames by Hanks and Hodges".
Click to Buy 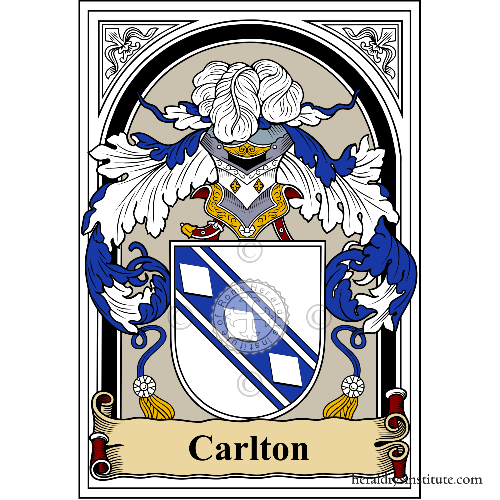 2. Coat of arms of family: Carlton

Argent, on a bend, azure, three lozenges between a gemel, argent.

Coat of arms of family Carlton from England
Click to Buy