Language of the text: English
Nobility: Nobles - Marquises
Nobles in:Italy - Spain (Stato Pontificio)
The country or region of the dossier mainly refers to the places where the family was ascribed to the nobility and may be different from those of residence
Variations Last name: Clarelli
Variations of surnames are frequent and mainly derive from involuntary acts such as translation errors or dialectal inflections or from voluntary acts such as attempts to escape persecution or acquisition of titles and properties of other families

Ancient family from Rieti, where since ancient times enjoyed the first degree in the judiciary, known as Clarelli or Clarella, that has spread, in the unfolding of decades, in various Italian and European regions, especially in Spain. The first family member we know about is a Nicholas, a man of great prudence and great value leader, who lived in 1330. This noble House, in all ages, always stood out, thanks to the prominent figures, which gave birth, in the public service, in the liberal and ecclesiastical professions and in the military service. Among these, without undervalue the omitted, we would like to mention: Alessandro, Rieti's gonfalonier in the years 1488, 1498, 1508 and 1510; Rutilio, brother of the previous one, who fought in Spain in 1499; Mariano, who was appointed orator of the City of Rieti by Pope Clement VII (Doctors 1527-1554). Nicholas in 1725 bought the land in Sabina ...
To know more 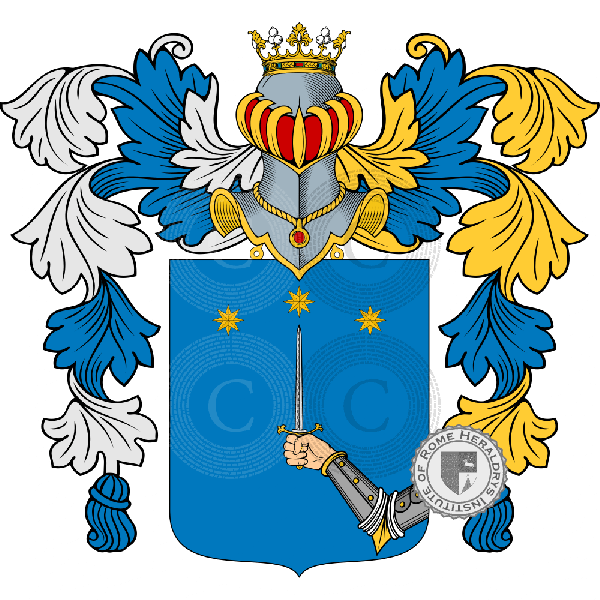 1° Coat of arms of family Clarelli

Azure, a dexter arm in armour, proper, holding a sword erect in pale argent, hilt and pomel or, in chief three stars of eight points transposed, or.

Blazon of family Clarella or Clarelli from Lazio, sources: drawing of painter Giovanni Rust inserted in the "Golden Book of Roman Nobility" page n.85, kept at the Capitoline Museum in Rome; "Historical Archive" of Heraldrys Institute of Rome.
Buy now 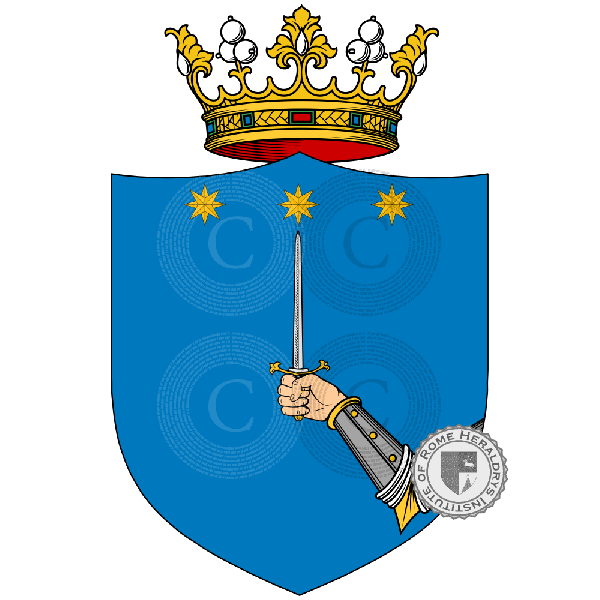 2° Coat of arms of family Clarelli

Azure, a dexter arm in armour, proper, holding a sword erect in pale argent, hilt and pomel or, in chief three stars of eight points transposed, or.