Language of the text: Italiano
Nobility: Knights
Nobles in:Italia
The country or region of the dossier mainly refers to the places where the family was ascribed to the nobility and may be different from those of residence

Ancient family from Campania, of clearly and ancestral virtue, which has spread, during the centuries, worldwide. The origin of this surname should be sought in the village of Serritella, once inhabited and fortified, situated at the plateau of the Serra. Its existence dates back to the beginning of the year one thousand and was part of the County of Civitate. At the end of the twelfth century it was included in the vast domain the Templar Knights and was one of their strongholds. However, after the suppression Order of the Templars, the village became a place of raids and attacks and, towards the end of the fifteenth century, in the bloody struggle between the Angevins and Aragoneses over the succession to the throne of Naples, took its complete destruction. It is believed, therefore, that the founders of this family, they came from this of Puglia village, and that they arrived ... 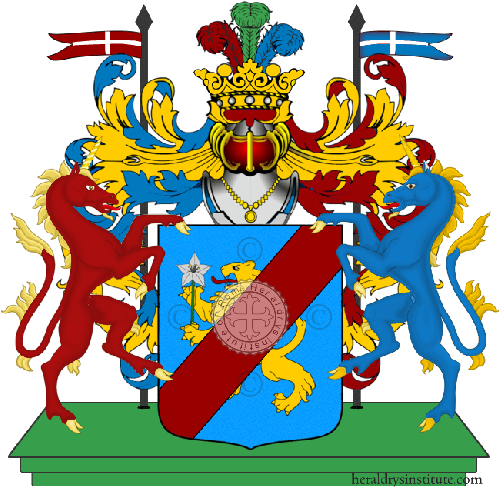 Coat of arms of family
Language of the text:

Azure, a bend sinister gules on a lion or, langued gules, holding a lily proper.