Language of the text: English
Please note this is an automatic translation done by a program, if you buy a heraldic document the text will be written by a native language heraldist
Nobility: Señores - Caballeros
Nobles in:España (Guipúzcoa)
The country or region of the dossier mainly refers to the places where the family was ascribed to the nobility and may be different from those of residence

This surname is very widespread in the peninsula with numerous manor houses. By references of historians of the time and others found by Araldis in the registry archives of cities and other private ones, we could affirm, but not assure, that this shield or another very similar to it, initially appeared from the 11th to the 14th century, particularly in the delegation that at the beginning of the 13th century, King Sancho of Navarra sent to the King of England Juan Sin Tierra, as part of the escort troops. The references of this family seem to be specified more frequently from the 15th to the 19th century, especially the facts of the consolidation of the American conquest, being the secretary of Don Francisco de Ibarra who on July 24, 1562 was appointed Adelantado and Governor of Nueva Vizcaya. . All of this seems to coincide with the family memory of ... 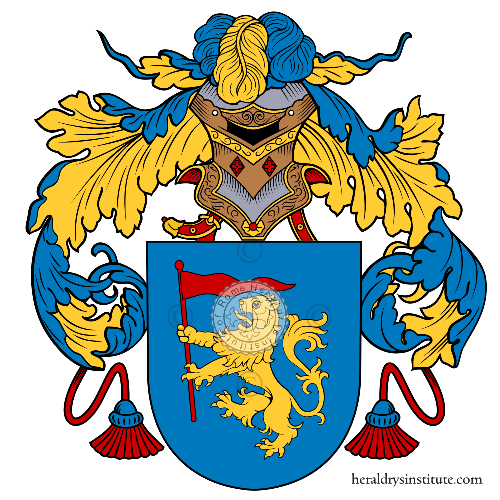 1. Coat of arms of family Galvao