Dossier: 600608
Type:Heraldic dossiers
Language of the text: English
Nobility: Barons - Knights - Lords
Nobles in:England
The country or region of the dossier mainly refers to the places where the family was ascribed to the nobility and may be different from those of residence

The surmname Lamb is of English origin. It was a nickname for a meek and inoffensive person. The word nickname is derived from "an eke-name" or added name, and since surnames originated as added names for help in identification, all surnames are, in a sense, nicknames. The name may also be a menonymic occupational name for a keeper of lambs, from Middle English, Old English 'lamb'. It may also have been a habitational name for someone who lived at a house distinguished by the sign of the paschal lamb, though surnames derived from house signs are less common in England than in Germany and central Europe. The name may also be a short form of the given name Lambert; composed of the Germanic elements 'land', land, territory and 'berht', bright, famous. A native Old English name 'Landbeorht' is attested, and seems to have survived the Norman Conquest, when it was ...

1. Coat of arms of family: Lamb

Blazon of family Lamb in England. Source of the Blazon: "The General Armory of England, Scotland, Ireland, and Wales" by Sir Bernard Burke, London 1884. 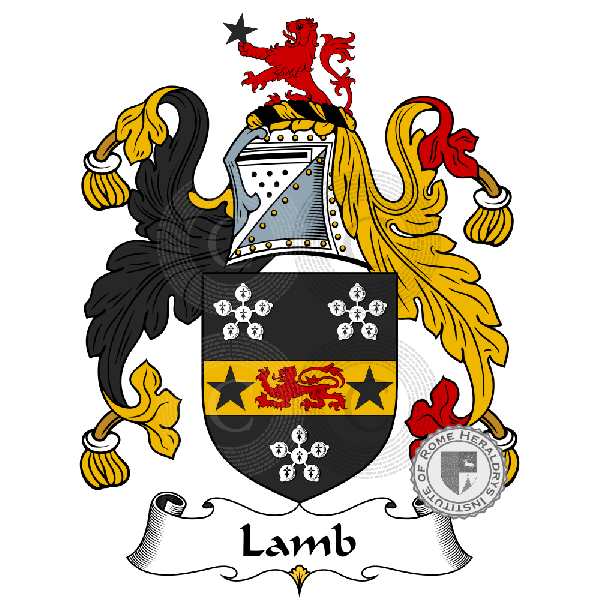 2. Coat of arms of family: Lamb

Sable, a fesse or, between three cinquefoils ermine chargend with a lion passant gules between, two mullets of the field. Crest: a demi lion gules, collared or, holding inhis dexter paw a mullet sable.