Language of the text: English
Nobility: Noble - Marquis
Nobles in:Italia
The country or region of the dossier mainly refers to the places where the family was ascribed to the nobility and may be different from those of residence
Variations Last name: Adelardi,Bulgari,Marchesello
Variations of surnames are frequent and mainly derive from involuntary acts such as translation errors or dialectal inflections or from voluntary acts such as attempts to escape persecution or acquisition of titles and properties of other families

Ancient and noble Guelph family of Ferrara, originally from Bulgaria, of clear and ancestral virtue, known as Marchesello, Marchesiello or Marcheselli, that has spread worldwide, over the centuries. Descending from the Count Adelardo (XII century), the family split into three major lines, one of which went in Rovigo, the second in Ancona and the third remained in Ferrara. Here some of its members were magistrates of the Twelve Elders and Captains of the People. A Marchesello was made Marquis of the "Marca Anconitana" and left his name to his descendants. Guglielmo M., in the year 795, was appointed Chief Captain. Other branch. Noble family from Bologna. Jacopino in 1257, Rodolfo in 1315 and Michele in 1336 were of the Elders, and the first of them, while supporting that office, received lands for the factory of bridge over the Rhine. Other family. Noble family from Mondovì, in the region of Piedmont. ... 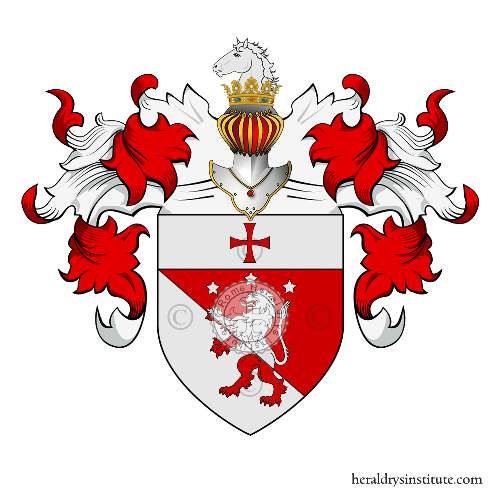 Party per bend gules and argent, a lion counterchanged, in the first between three stars argent; over all on a chief argent a cross pattée gules. Crest: a horse head couped at the neck, argent.