The Heraldic Traces are dossiers made by an A.I. useful as a starting point for researchers and passionate heraldists and confirm that there is information to work on and it is possible to order a heraldic document.

Results of the family Coat of Arms search
BALDUCCIO 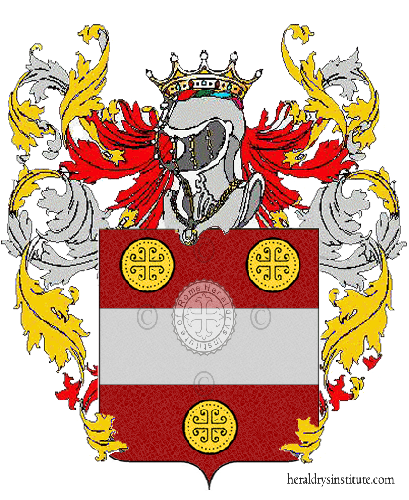 Balducchi, very very rare, has a strain in Tavernola Bergamasca in the Bergamo area, one in the Modena area and one in Tuscany, Balducci is typical of Bologna, Romagna, Tuscany, Marche, Umbria, Lazio with a stock also in the Bari area, Balduccio, absolutely rare, it would seem to be from Trapani, Balduzzi has a stock in the Bologna area, one between Bergamo and Brescia and one in Alessandria in the Alessandria area with branches in the Pavia area, in the Parma area and in the Genoese area, Balduzzo, absolutely rare, is the area between Trentino and Vicenza, should derive, directly or through Italianizations, from the medieval name Balduccius of which we have an example in a testament of 1296 in Colle Val d'Elsa: "... Ego Balduccius vocatus Duccius olim Meluccius de Colle Valle Elsa, Imperial auctoritate Notarius, praedictis omnibus memoratis et hac acta rogata subscripsi propria manu. ", in the second half of 1500 we find Giovanni Francesco delli Ferrari called Balduzio (or Balduzzo) surveyor of Castel Arquato (PC) incari of cadastral measures. additions provided by Giovanni Vezzelli BALDUCCI - As for Baldini, for Balducci too, in addition to Baldus, one could trace the personal (Ri) balduccius, appointed from 1148 and motive by Ribaldus, alive in Modena from 1125, by the Longobard staff Rîdbald. Source: F. Violi, Surnames in Modena and in the Modena area.