Results of the family Coat of Arms search
CAFFAREL 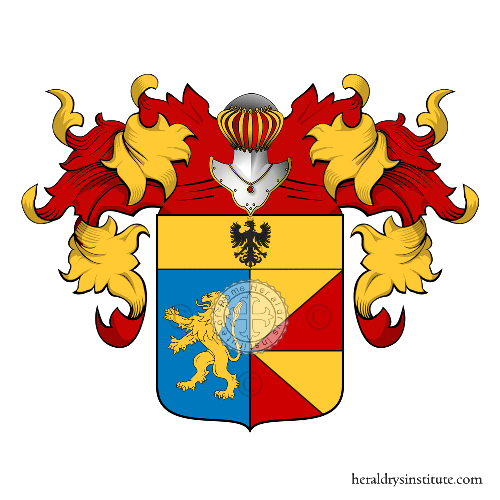 Cafari is almost unique, Cafaro is typically southern, from the area that includes coastal Campania, Basilicata and Puglia, with maximum concentration in the Salerno and Bari areas, Caffarella would seem to be specific to Trani in the Bari area, Caffarelli has various stocks, in the Terni and Rieti areas , in Rome, and in Sicily in the Messina area of San Piero Patti and Patti, and in Palermo, Caffarello, almost unique, it would seem Sicilian, Caffari seems typical of Lazio, Caffaro, very rare, and Caffarel almost unique are specific of the low Turin area, of the area of Pinerolo and surroundings in particular, Caffarri is specific to the Reggio area, should derive, directly or through hypocoristic forms, from the medieval name Cafarus or Caffarus of which we have an example at the turn of the eleventh and twelfth centuries with the sailor, crusader , consul of Genoa: "..Caffarus de Caschifellone Genuensis Rei publicae rector et historiographus ...", from the Genoese Annals 1099-1163 years: "... Ianua tuta quidem fuit illo consule pridem, Urbs ea que movit, quod sic ex order novit; Nomen and Cafarus, presens quem signat imago; Vivat in eternum cuius generosa propago, the southern forms could also derive from nicknames originated from the Arabic word kaafir (infidel). additions provided by Giovanni Vezzelli Cafaro is a southern surname that in addition to the hypothesis of 'kafir' = unfaithful, could also derive from the adjective Calabrian and Sicilian 'càfaru' = worm-eaten.