Dossier: 881334
Type:Heraldic dossiers
Language of the text: English
Nobility: Notables - Patricians
Nobles in:Italy (Kingdom of Sicily)
The country or region of the dossier mainly refers to the places where the family was ascribed to the nobility and may be different from those of residence

Ancient and notable Italian family, originally from Puglia, of clear and ancestral virtue, that has worldwide spread, over the centuries. According to what is handed down, the family is originally from Melpignano but in 1644 a branch moved to the city of Parabita, for the marriage of Sabatino Caggiula with Caterina Andriaco, notable in Parabita. Although of bourgeois extraction, the Caggiula family is remembered as one of the most notable in the Lecce area, appearing numerous times in the historical documents of Melpignano. Another branch flourished in Matino instead. There the family integrated into the productive fabric of the city, also distinguishing itself there as a notable one. Other branches then flourished throughout the Kingdom of the Two Sicilies. Moreover this family, in all its branches, has distinguished itself for its representatives, who illustrated themselves both in arms and in the liberal professions as well as in ecclesiastical careers. From ... 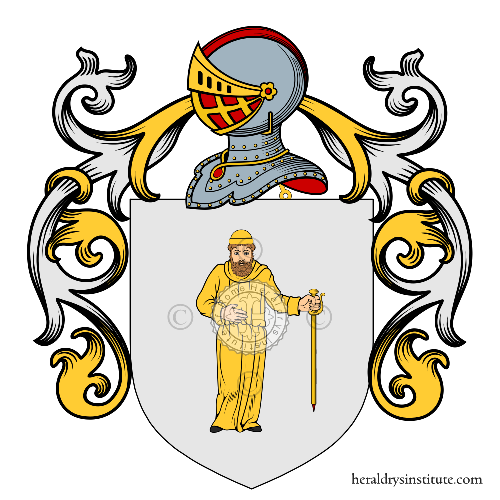 1. Coat of arms of family: Caggiula

Argent, a pilgrim holding in his sisnister hand a staff or.

Unfortunately in the heraldry books is not described the family coat of arms, whose memory must have been lost due to the malevolent action of time. However, due to fragmented archival information and usual heraldic conjectures, we could reconstructed it.