Language of the text: English
Please note this is an automatic translation done by a program, if you buy a heraldic document the text will be written by a native language heraldist
Nobility: Nobili
Nobles in:Italia (Toscana)
The country or region of the dossier mainly refers to the places where the family was ascribed to the nobility and may be different from those of residence

The family has been known in the land of Populonia, the principality of Piombino, since the fifteenth century and is wanted there transplanted from Ferrara where it enjoyed the rank of noble magistrate, obtaining the inscription to that patriciate. SM Vittorio Emanuele II with RD 23 October 1871 appointed Azzolino, mayor of Piombino for the three-year period 1871-1873, a position that was confirmed to him almost uninterruptedly until 1882. With D. Pref. Of 6 June 1862 he also obtained the appointment as captain of the National Guard of Piombino. The Prefect of the Compartment of Pisa also conferred him the position of Prior for the new magistrate of the Community of Piombino for the years 1859 and 60. He was also chosen for the offices of Commissioner for direct taxes, government delegate and then president. He occupied almost all the main offices, including those of charity and in which he ... 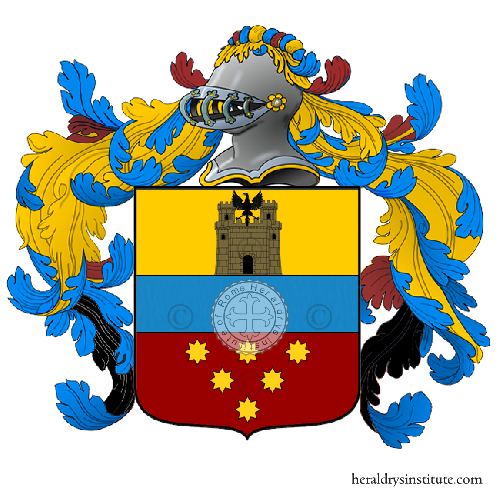 1. Coat of arms of family Celati