Dossier: 14782
Type:Heraldic dossiers
Language of the text: English
Please note this is an automatic translation done by a program, if you buy a heraldic document the text will be written by a native language heraldist
Nobility: Nobili
Nobles in:Italia
The country or region of the dossier mainly refers to the places where the family was ascribed to the nobility and may be different from those of residence
Variations Last name: Cuppone
Variations of surnames are frequent and mainly derive from involuntary acts such as translation errors or dialectal inflections or from voluntary acts such as attempts to escape persecution or acquisition of titles and properties of other families

Ancient Bolognese family, of clear and ancestral nobility, whose blazon is reported in the work "Blazon Bolognese, that is, noble weapons of Bolognese, noble, citizen and aggregate families", published in Bologna between 1791 and 1795, propagated during of centuries, in different regions of Italy. The origin of this cognomination, in the name of illustrious genealogists, should be sought, through a hypocoristic, in the medieval name "Cuppus", probably belonging to a, today unknown, progenitor. In any case, this family, in every age, always managed to stand out, thanks to the high characters, to which it gave birth. Among these, without raising the value of the omitted, we remember: Matteo, doctor in "utroque jure", living in Bologna, in 1534; Luigi, doctor of Sacred Theology, author of numerous essays, living in Reggio Emilia, in 1568; Arrigo, of the Regular Clerics, esteemed and covered with honors, by Guglielmo, Duke of Mantua; Gio. Maria, Bolognese ... 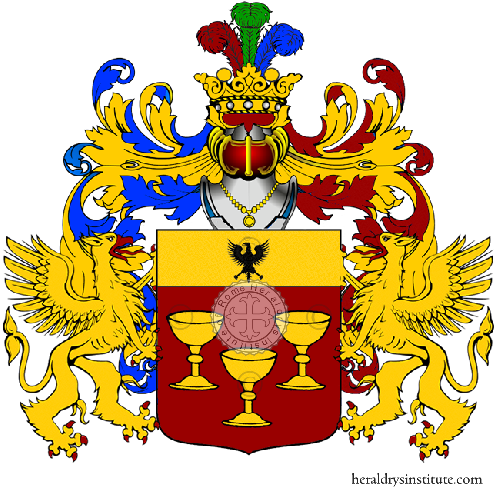 1. Coat of arms of family: Cuppini