Dossier: 600269
Type:Heraldic dossiers
Language of the text: English
Nobility: Nobles - Knights - Lords
Nobles in:England - Ireland
The country or region of the dossier mainly refers to the places where the family was ascribed to the nobility and may be different from those of residence

The surname 'Daly' originates from Ireland. It is has been Anglicised from the Gaelic form Odalaigh 'descendant of Dalach', a personal name from 'dal' (modern 'dail' meaning meeting, assembly. Compiled information from Historical and Private archive's has confirmed that the surname 'Daly' and or it's variant's, dates as far back as the thirteenth century were a 'Ralph de la Dale', from Suffolk, England, is recorded on the Hundred Rolls in 1273. An Irish family of this name claim to be descended from 'Dalach', tenth in descent from 'Niall' of the Nine Hostages. The exact period of settlement in North America has not been definitely determined but Information extracted from Public and Civil registry archive's confirm that one of the first settlers was a certain 'Matthew', aged 43, from Carrigtohill, Ireland. He immigrated to North America in 1826, and settled in New York. He died on the 3rd of May 1833., having fathered one son 'Timothy Daly', born 1813. Today, 'Daly' is the 'Seven hundred and eighty-sixth' most common surname in North America. ... 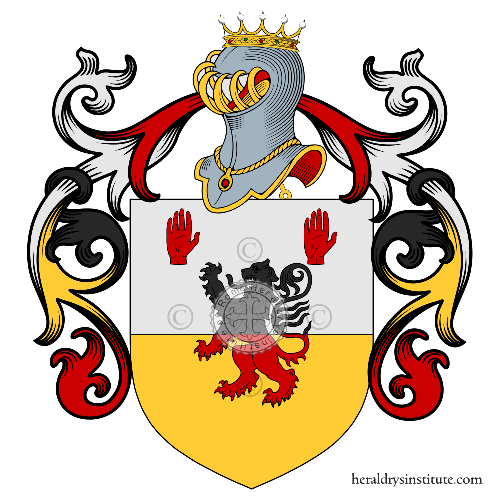 1. Coat of arms of family: Daly

Per fesse argent and or, a lione rampant counterchanged sable and gules, in chief two dexter hands gules.