Language of the text: English
Nobility: Knights - Lords
Nobles in:England (England)
The country or region of the dossier mainly refers to the places where the family was ascribed to the nobility and may be different from those of residence

The surname Hunt is of English Origin.It was an occupational name for a hunter;derived from the Old English 'hunta',derived from 'huntain' to hunt.The term was used not only of hunters on horseback of games such as stags and wild boars,which was in the Middle Ages a pursuit restricted to the ranks of the nobility,but also of much humbler bird catchers and poachers seeking food.A tenth century colloquium was;"One craft I know.Which?'Hunter' I am."The name thus comes to signify a 'huntsman'.The Old English word seems to have been used as a personal name and survived into the Middle Ages as an occasional given name."With hunte and horne,and houndes him beside",an old poem.During the winter months when meat animals could not be kept well,an important source of food was the game killed by the Hunt or Hunter,whose work was both a nescessity and a pasttime for the ruling classes.The British were famed ...
To know more 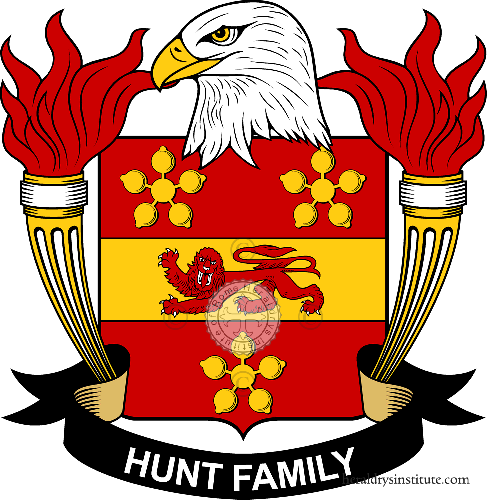 1. Coat of arms of family Hunt

Coat of Arms of Hunt from U.S.A.
Click to Buy