Results of the family Coat of Arms search
CARRA 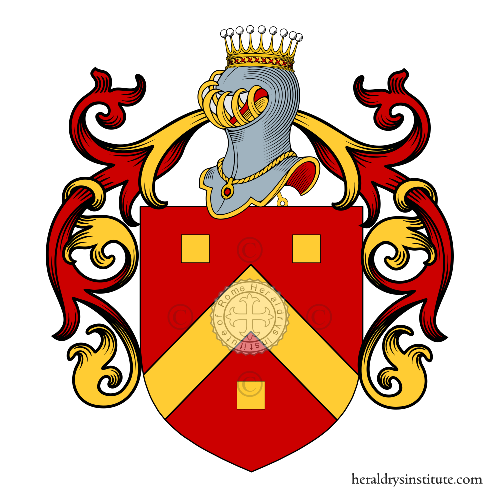 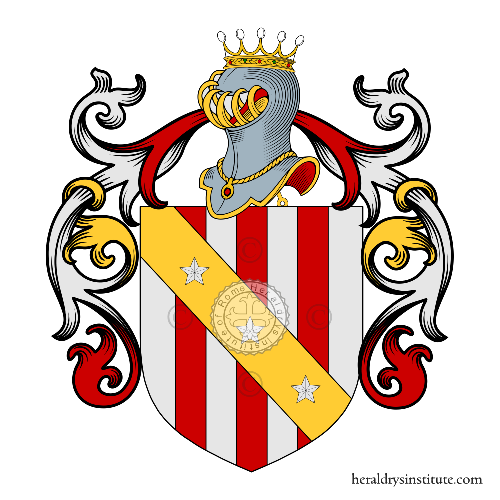 Carra is widespread throughout Italy with an area of choice between Mantua and Parma, there are significant presences also in the provinces of Lecce and Palermo, Carrà defines at least two stocks, one in the provinces of Pavia and Piacenza and the other in the area of Vibo Valenza, Carrai is typically Tuscan, especially from the Florentine, they should derive either directly or from dialattal modifications of the trade of carriage, carrier of carts. supplementation provided by Giovanni Vezzelli Carrà in Sicily and Calabria comes from toponyms that mean 'cerri forest'; in fact in the Greek dialect of the area of Bova in Calabria 'karro' = Turkey oak. additions provided by Giuseppe Concas CARRA; CARRAI: both derive from carts, but the first is an ancient unit of measurement of capacity for liquids, which they once used in Piedmont and corresponded to about 500 liters, and it was about the same amount of liquid, usually of must or wine , that it was possible to transport in a cart, which was a big barrel, placed on a cart, pulled by horses or oxen. The large measure was usually divided into 10 parts, brente. A brenta, in turn, is (still in Turin) a unit of measurement with a capacity of about 50 liters. It is a kind of wooden tub, which was used for transporting wine. The etymology of the term is still obscure, but we think it derives from the Latin venter = belly; also for the ancient form of the bigon that it was nothing else than a skin of skin. Therefore it would be a Latin voice, not a pre-Roman one, as some claim. Carra and Carrai as surnames could derive not so much from the profession of wagon manufacturer, but rather from that of transporters and merchants. The surname Carra is currently present in 238 Italian Municipalities, with the greatest diffusion in the border areas between Lombardy and Emilia Romagna: Mantova - Parma. Carrai is present in 94 Italian Municipalities, with greater diffusion in Tuscany. Carra is present in only one Sardinian municipality, in Arzachena, but it is clearly imported. Carrai is also present in only one Sardinian municipality, in Cagliari. Both Carra and Carrai are however present in the ancient documents of Sardinia. Among the signatories of the Peace of Eleonora, LPDE of 1388, are: Carra Anthonius - de Aristanni; Carra Joanne, jurato ville de Paingionis (Pabillonis); Carra Juliano, ville Selluri (Sanluri - Seddori); Carrai Parisono - de Castri Januensis (Castelsardo); Carras Joannes, villas Sasseri. In the Condaghe of Santa Maria di Bonarcado, CSMB, of the XIth, XIIIth century, there is a certain Carras Furatu (172), curator (administrative and judicial officer) of Aristanis (Oristano), heads in a quarrel (kertu) for a maid ., Maria Pisana, and her son, between the prior of the convent of Santa Maria and the prior of Bauladu, donnu Francardu. A note should be made here: carra in Logudorese and cuàrra in Campidanese, is a unit of measurement for cereals and for lands. A càrra or cuàrra corresponds to about 20 liters of wheat or other cereal, we take wheat because it is the noblest of cereals. In land measurement (land surveying) one cuàrra corresponds to 20 ares (1 ara = 100 square meters) = 2,000 square meters. The largest measure of cuàrra is moi, which corresponds to 4,000 square meters. Therefore dus mois and cuàrra correspond to one hectare of land, ie 10,000 m, q. Usually unu moi (4,000 square meters) = duas cuàrras de terra was as much a farmer, with a nice yoke of oxen (u'jù de bois) and a plow, could plow and sow in a working day (not less than 10 work hours). Unu quartu is half of a cuàrra and corresponds to 1,000 square meters; unu quartucciu = 500 square meters; an imbudu = 250 square meters of earth. To the extent of grain cereals "sa mesura" was used, which was a container, first of cork and then of iron equivalent to 20 liters = a cuàrra. Curiosity: for the wheat the "mesura a rasu" (a satin) was used, for other products of the earth, for example, fava beans, peas, chickpeas, almonds, "a cùccuru, that is with the" measure "well filled. when I was a child, I am 63 years old - 2008, these "measures" were still used, but to avoid the error I asked my mother, who has almost 90, but with all the "measures" still well placed in her skull!