Find origin of your last name

Want to know the Origin of Your Surname and the family's Coat of Arms?

It's simple: write your last name below and press "Submit", if you want to receive the results by e-mail insert it into the form before pressing "Submit"

Shop Images of Coats of Arms

Heraldry is the study of the blazon and the coat of arms, also known as shields. Heraldry therefore identifies, describes and catalogs the graphic elements that together identify a family, an institution, a group of people or an individual.

In fact, when a drawing is done in accordance with heraldic rules, anyone who knows these rules is able to describe exactly the coat of arms simply looking at the design and vice versa. Therefore, flags and logos or trademarks of a commercial or industrial nature are not among the objects of study of heraldry.

The shield, together with its ornaments, is the graphic representation of the coat of arms while the blazoning is its verbal representation, its description.

The blazoning originated in the practice of medieval tournaments. The heralds had in fact the need to create reliable coats of arms collections ("stemmari") to describe those exclusive elements that allowed to identify at a distance the knights covered with metal armor thanks to the banners they raised or to the horse's gallop.

Over time, the blazoning evolved into an increasingly complex language, with its own vocabulary and syntax so that it could describe even the most complex blazons without ambiguity.

Initially, heraldic identification was limited to only the elements represented on the shield. It then evolved into greater complexity and the ornaments became an integral part of it.

This is also the reason why that part of the heraldry that deals with the description of the coats of arms is often defined as the "art of the blazon".While the study of the history of aristocratic families and their noble titles is called strictly "heraldry".

In the countries and in the historical periods in which the coat of arms has, or has had, an actual value as a unique element of recognition of people or institutions, the granting of a coat of arms and the drafting of the related blazon are entrusted to legal bodies and guaranteed by the State, in the same way as names and surnames.

Since the entry into force of the Republican Constitution, the Italian State no longer guarantees the individual and family heraldic system, as it is directly connected with the noble titles, no longer legally recognized. However heraldic institutes continue to pass on and preserve this noble and ancient art. 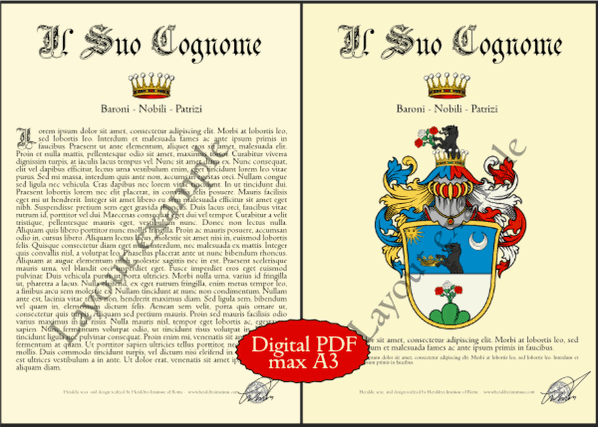 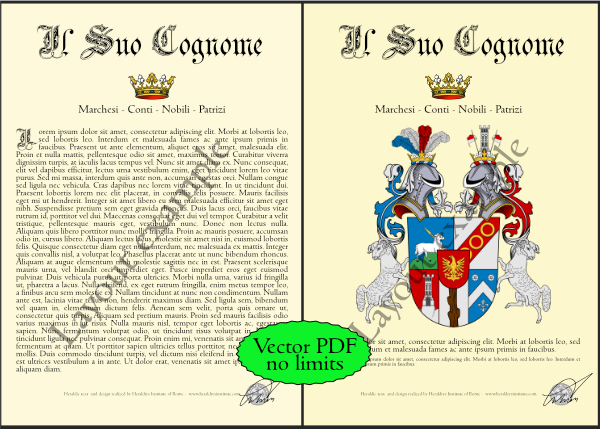 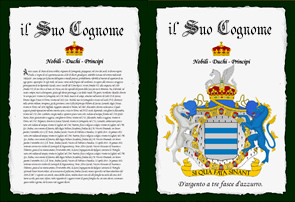 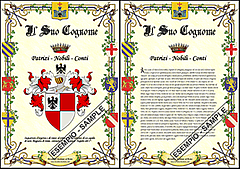 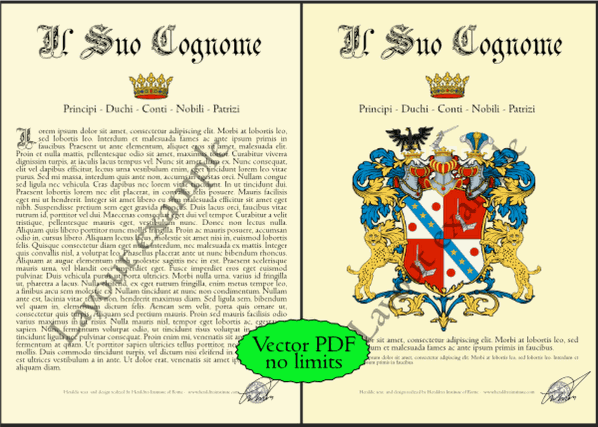 Art.110
your Heraldic Document customized in VECTOR PDF format with attached the copies of all the sources
Price: 390.00 €
(USD:473.18)
Learn more

what are the characteristics of a heraldic document?

A heraldic document is not:

It is always possible to make a preliminary research within our archive. About 100,000 heraldic tracks, banners and coats of arms are available free of charge by searching on this page of our site: Search Page. Just fill in the form with the desired surname and press enter.

Cannot find the surname you were looking for? Do not worry, our researchers are always at work to increase family data. In this case, contact us for a closer look by specifying that you have already tried the self-searching.

Heraldrys Institute of Rome strongly believes in the intellectual work of human beings and for this reason, given the type of its activity uses only craftsman work.

Behind our works there is always the meticulous work of heraldic researchers as well as our customer service is handled by experts in customer care.

We deliver within 4 working days our digital products, some searches may be longer but they never exeed 1 week.

Our work is totally handicraft, the documents are always unique and it takes a while to work the best.