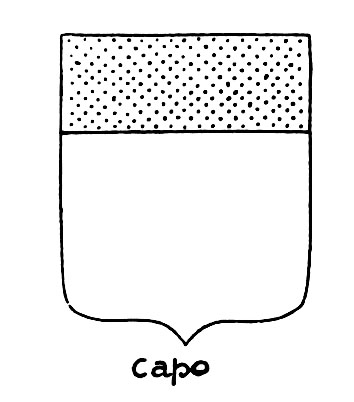 Honorable piece of first order that occupies the upper part of the shield, limited by a horizontal straight line placed at a distance from the upper side equal to one third of the height of the shield itself. It can also have a triangular shape ("pinned"), or the base line can be long-toothed ("wedged"), crenellated ("crenellated"), curved ("rounded"), or not horizontal ("oblique") ; if the base is formed by two curved lines that start from the center and arrive at the sides of the shield, it is said to be "rounded mantle". There are often represented the concession weapons given by sovereigns, and those of the equestrian or religious orders to which those who raised the coat of arms belonged (see the following).
Images taken from the valuable work "Raccolta Ceramelli Papiani"